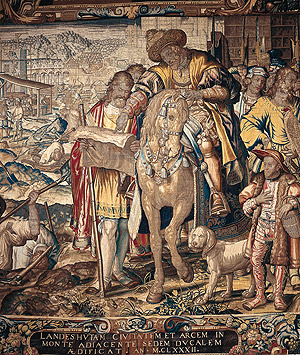 The castle, perched above Landshut and visible from a long way off, first acquired the name of Trausnitz in the 16th century. Until then it had had the same name as the town itself: it was thus built to guard and protect ("Hut" = protection) the land around it.

The ancestral seat of the Wittelsbachs had already expanded to its present proportions under Ludwig the "Kelheimer", who founded the castle and the town of Landshut in 1204 and was an important historical figure at the time of the Crusades. By 1235, when Emperor Friedrich stayed in Landshut as a guest of the duke, the castle was largely complete. In the first half of the 13th century, Trausnitz was not only a political centre but also a centre of Staufen culture. Several minnesingers, including Walther von der Vogelweide and Tannhäuser, stayed at the castle. 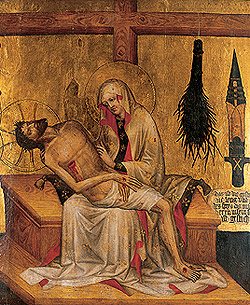 Middle panel of the high altar of
the Castle Chapel, ca. 1425

From 1255 to 1503 the castle was the residence and seat of government of the dukes of Lower Bavaria. In the 15th century in particular, under the "Rich Dukes" of Bavaria-Landshut, it was altered and extended many times. The Princes' Building and the New Knights' Hall were constructed, the ring walls were raised and extended and the striking towers were built. Even today, at four-yearly intervals, the "Landshut Wedding" is still celebrated with a re-enactment of the festivities organized in 1475 by Ludwig the Rich for the wedding of his son Georg and Hedwig, daughter of the Polish king.

Duke Ludwig X, who lived in Landshut from 1516 on as the co-regent of his brother and the governor of Landshut, gradually redesigned the castle, first in the late Gothic style and later in the Renaissance style. Unfortunately little has remained from this period. Old views of the castle show that in the 16th century the Outer Courtyard was full of buildings serving various functional purposes. 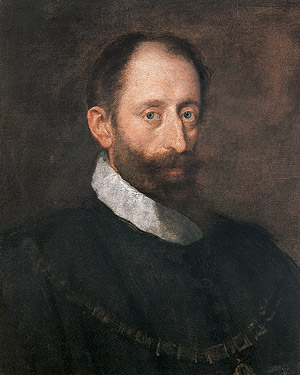 Wilhelm V, born in Landshut in 1548, lived at Trausnitz Castle during the period from 1568 to 1579 prior to becoming the reigning duke. Here he assembled a large number of important artists, musicians and comedians. It was during this period that the castle was decorated with important wall paintings in the style of Florentine Mannerism, most of which were lost in a devastating fire in the year 1961. The paintings were retouched and completed under his grandson Elector Ferdinand Maria from 1675 to 1679, and it was during his era that other rooms of the Princes' Building were painted for the first time.

Ultimately Trausnitz could no longer meet the increasing representational requirements of the baroque rulers. In the 18th century it was put to various uses, for example as a barracks and a prison for aristocratic prisoners, and in 1762 it was used as a manufactory for woollen goods and silk. At the beginning of the 19th century the castle served as a barracks and a hospital, and from 1831 as a cholera hospital. From 1869 appropriate guest accommodation was prepared on the 2nd floor for visits by King Ludwig II, but this was never used.

From the 18th century the electoral bursary registry was also located here, which later became the State Archives for Lower Bavaria. In a devastating fire on 21 October 1961, large sections of the Princes' Building were destroyed, and the castle was subsequently comprehensively restored and renovated. 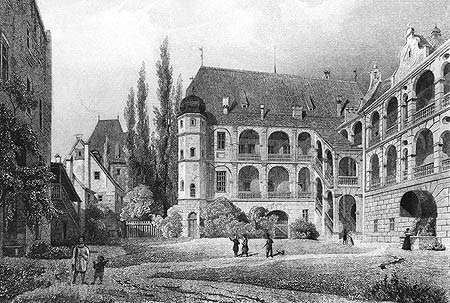 Included in the tour of the castle are medieval halls such as the impressive vaulted Old Knight's Hall and the castle chapel with its important sculptures and the winged altar-pieces of the Rich Dukes. The Renaissance is represented with vaulted cabinets, panelled rooms and the famous Fools' Staircase with its monumental scenes from the Italian Commedia dell'arte. The tour culminates with a view of the town from the tower terrace.

The Wittelsbach dukes were traditionally great collectors, and examples of their treasures are on display in the Kunst- und Wunderkammer (Chamber of Art and Curiosities) – a branch of the Bavarian National Museum – in the former Ladies' Apartments (Damenstock) of Trausnitz Castle.